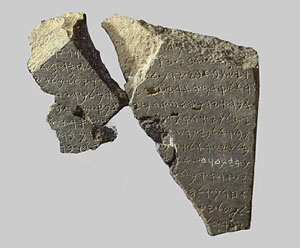 This inscribed basalt stone contains an ancient reference to the Biblical King David. Being roughly a foot tall, it was written in Aramaic in the mid 9th century BC and is known as the Tel Dan Stela. The text actually refers to the “House of David,” meaning his royal family. Found during excavations in the ancient city of Dan in 1993/94, it is now located in the Israel Museum.